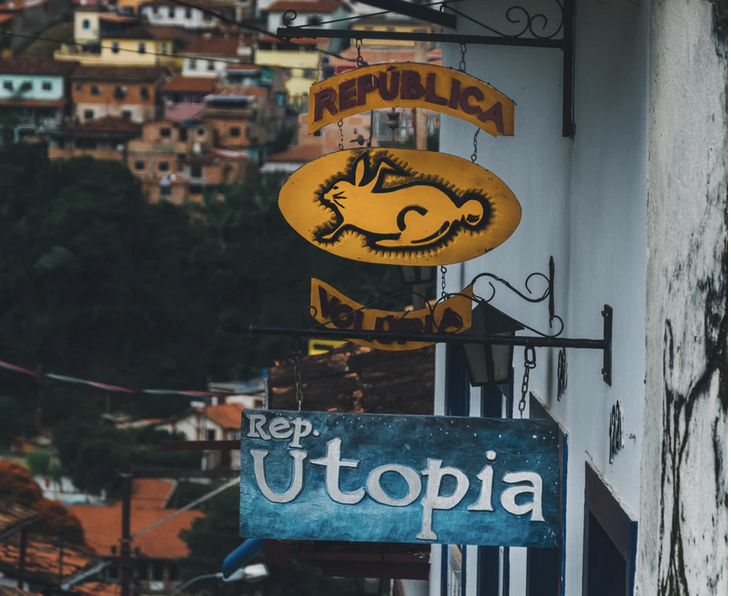 It all starts with the curriculum not being ready for the jobs of tomorrow, followed by the growing unemployed population whose profile doesn’t fit market demand.

The wealth gap only widens as we try to patch the economy by encouraging profit over sustainability, making the same mistakes all over again. The rich 1% owns 45%+ of the world’s wealth and opportunities for everyone to rise are not equal. Not in Nigeria, not in the US, not in Panama nor in China.

Imaginary national borders and their authorities control our freedom and determine our health, our education level, our migration status — and our so-called democracy doesn’t hear us as we scream from the top of our Twitter lungs or hit the cooking pans during quarantined nights.

After several months of being locked up, the invisible coronavirus displayed a pasarella of governments and their naked bodies, a reminder of a decades-long list of unhealthy habits.

Make-up, band-aids, spandex, or wigs — nothing is powerful enough to hide the corruption and inefficiency tumor that has spread across institutions. Not even the classic McCombo of subsidies and populism.

And yet we keep trying. With the same system, with the same tools, expecting a different result.

Cyber rooms filled with strangers discuss daily the different strategies to “fix the economy”, most aiming, of course, to regain economic growth — as if that’s proven our best and only chance at individual happiness and collective well-being.

We built a working class that idolizes working long hours and stress, over self-care and holistic well-being. We designed a world where diseases caused by bad habits kill 7 out of 10 people globally (pre-COVID days) and a society whose values are inescapably shaped around individual consumption over environmental sustainability.

And then, after a hundred years in the making, a random bat took us into a pandemic. Locked inside, we reduce emissions by 8% without planning for it and we were forced to take a step back from the fast-paced urban life and reconsider our choices.

What comes ahead is my brain’s utopia of the future; a research-based visualization of where we could end up if we play our cards smart.

Forced to leave old business models behind, entrepreneurs innovate and pivot. The closing of millions of enterprises worldwide drives the world to go digital, like a gen-z + millennial tsunami of automation and interconnection. Labor-intensive work diminishes as software eats the world and workers without technical skills have a harder time integrating into the market. This is harsher for the boomers, whose expertise may no longer be needed, but fuels younger generations and gives them momentum.

Left without much options after graduation, the entrepreneurial youth will lead the shifting nature of the economy. They will start building and crowdfunding their own businesses, applying their sustainable, health-conscious, open-minded, disruptive mindset to projects they bring to life.

As economic degrowth hits, we also realize we don’t need as many things to survive as we originally thought, and naturally transition to buying quality products over things that become garbage on that same day. We realize the economy can’t thrive if we hit another health crisis or natural disaster, so we turn to sustainability on every front. We switch diets, change habits, and establish holistic policies for self-care. Economic sustainability, environmental sustainability, and the sustainable health of an individual become core to the design of new economic and political models.

Circular economies, shared economies, orange economies, crypto economies, the entire alt-economy gang will finally get a seat at the table during this time of doubt and economic uncertainty. Ultimately, social media, Netflix trends, and millennials, the largest educated generation on Earth, will define the model(s) that will spread in the years to come.

4-day work-weeks become trendy, just like co-living and co-working communities for digital nomads - who slowly become the norm. The lack of commuting reduces traffic and pollution, and by working remotely, both parents are able to raise their kids equally and take care of the house, together. This builds empathy for each person’s role within the relationship and contributes greatly to a more gender equal world.

A lot of people will move away from the tension-filled, unsafe, congested city life looking for a slower pace of life in the rural areas or even a cheaper place to work remotely from. Especially those living on the 30th floor of apartment buildings will start feeling the gravitational magnetic pull humans have towards grass, the ocean, and land. Life locked up in a concrete box taught humanity to appreciate nature and the grounding power of Earth’s resources.

Inevitably, technology rises as a way to build social trust. Now this is important. Social trust is understood as the trust between the government, its citizens, and their neighbors. The more we trust each other, the more respect we have for each other, the more we think of each other as a collective when making decisions big or small. Countries with higher social trust, like Germany or Australia, will progress faster and steeper than those with lower social trust, like Panama or Honduras, creating an even deeper global unbalance.

As human ignorance, ineptitude, and lack of will are mitigated by the use of technology, the world’s innovative countries quickly rise to the top. To replace the habit of stealing hundreds of dollars in bureaucratic processes, for example, comes smart contracts and automated flows, inherently making processes more efficient, transparent, and hence more trustworthy. A citizen making a request to a government institution sets a process in motion with a few clicks that ends up in integrated databases + data analytics tools that encourage and establish evidence-based decision-making policies and a user-friendly experience for the citizen.

Due to privacy concerns, however, only the countries with the highest levels of social trust will allow their e-Government to operate with ease. This means citizens from regions where social trust has historically been established, like Japan, will trust their governments to implement impactful technology faster; whereas countries with a longer-lasting tradition of corruption will be more skeptical toward accepting these government innovations (and with due reason).

As technology enables governments to be more transparent, sustainable, and effective, it also causes unemployment of government officials. Jobs are lost, but people are retrained and given incentives to start their own businesses. Entrepreneurship education modules, fiscal incentives, technical bootcamps, and unschooling online models, especially ones tailored towards the youth and minority groups, rise staggeringly as people demand better education to survive in the new normality.

As innovation touches every fiber of our lifestyle, the internet settles in as the democratizing tool of our age and digital infrastructure is established as a human right — dragging with it digital education. For the first time in history, the richest and the poorest people in the world will have the same access to learn from world experts on any field, at any given time, through the same apps and learning platforms.

Kids are not in class for so many hours a day, because they no longer spend as much time being passive learners, but rather become active producers and drivers of their own learning journey. High-school and college become intertwined as students get to apply the knowledge learned through conversations with experts, internships, and workshops a lot earlier in their career. They are taught design-thinking and problem-solving skills, adaptation mindset, emotional intelligence, relationship management, sexuality, finance, and self-understanding. This is done through project-based learning and real-world examples, not through memorization or abstract, text-filled, one-sided presentations.

And then, we hit the biggest roadblock of them all: the government system. A representative democracy created more than 200 years ago, born to imitate the Athenian democracy a few millennia old. An advancement in history, for sure; the beginning of democracy as the modern world understands it. But with time, people in the 21st century became used to constantly representing themselves and increasingly felt disconnected from their politicians.

Especially the youth, which are the biggest generation on history representing upwards of 30–40% of any given country’s population, are used to voting with their likes and engagement every time they feed the algorithm with their digital habits and beliefs; they vote with their money every time they buy organic tofu and oatmeal milk.

The consequence is a clash of expectations between the speedy and automated processes citizens are used to experiencing in their private life and the ones the government has been offering for years.

Most startups fail due to legacy code that’s only a few years old. Now try dragging legacy code that’s over 200 years old — it’s a surprise governments as we know them are still alive at all. The frustration that erodes across the world ends up breeding one common sentiment: the need for a new political model.

Lack of legitimacy and representation in the decision-making process opens the space for platforms to try to fix these issues. Design-thinking, agile methodologies, and software engineers have sex and the offspring is a government progressive enough to build these applications themselves. Of course, this is not likely to happen — most likely organized citizens will take matters onto their own hands and design new models that make the old one obsolete (the word organized is the key).

Ideas like replacing Parliament with an AI-representation marketplace, voting cryptocurrencies, and liquid democracy will become common conversation for a while, until we dare start testing them out in real communities.

We feel the pain, hypothesize solutions, test, measure, analyze the data, and try again. And finally, after a few rounds of that cycle, we reach stability. We become used to the certain uncertainty of innovation at the core of every model, lifestyle, and organization.

The thing about innovation though, is that, at its core, innovation is just ideas; a utopia in our brains based on the problems around us. We feed it with every interaction, we share it smoothly through conversations with friends. Next thing we know, we’re actively thinking about it before going to bed.

Until, one day, we build up the courage to actually build it. Some will call us crazy for trying, and a lot of them will be right. Some will agree with the cause and join in the fight. And then, on a Tuesday afternoon, you pick up a book from the shelf, and realize that once-crazy idea you thought about in the shower is now called history.