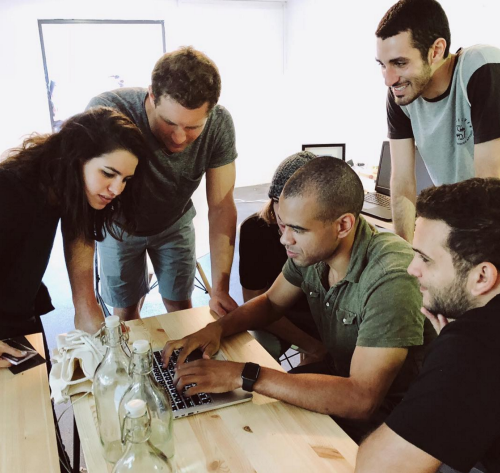 If someone told me 6 months ago that today I’d be helping people learn to code around the globe at the world’s top-rated coding bootcamp, I would call bullshit.

Purposefully avoiding everything math-related, I double-majored in Political Science + International Studies, triple-minored in Latin American Studies, History, and Peace Studies. And I loved every single class of it.

When it came down to job hunting, I excitedly accepted an offer as a diplomatic attaché at the multilateral Embassy of Panama to the United Nations in Geneva, where I stayed for almost two years. I learned about international negotiations, drafting & presenting declarations, diplomatic protocol, the human rights system, refugee & migration rights, environmental international law, you name it. I became obsessed with understanding the international governance system to the core as I felt this was the only way to make sure my time there had a lasting positive impact for the people in Panama.

Yet, no matter how much great work we did or how many long hours we put into seeing the resolutions pass, I couldn’t help but feel like we weren’t doing enough. Somehow, it felt like the system was strategically detached from people’s realities and interests on the ground, and we were repeatedly getting stuck in bureaucratic, traditional processes that served no one. This led my idealistic, millennial brain to a halt.

Little did I know that this frustration was actually the beginning of a life-changing path. After a few months of noticing the same trend, I started spending hours after work just researching existing technologies that could optimize the inefficient patterns I was noticing across organizations and meetings.

This cycle continued until I stumbled upon Democracy Earth, an organization creating a blockchain-based platform to replace the current international governance system by allowing citizens to be directly represented in a global scale. Brain fart 🤯.

From that point on, I officially became addicted to the idea of combining politics and technology. I started attending every blockchain, tech, innovation, and coding meet-up happening in Geneva to learn more about this underworld that was silently shaping the future of politics.

Eventually, thanks to Facebook’s ad-targeting algorithm, I was spammed enough that I decided to apply for a Rails Girls Weekend Coding Workshop. To my surprise, I was one of the few lucky women admitted, and to be honest, it was probably one of the most enlightening weekends of my career to date. Not necessarily because of the coding itself, but rather because it was enough of an introduction for me to loose the fear of programming. I stopped seeing it as something only mathematical geniuses with a video-game shirt could do, and started understanding it as an accessible, on-demand skill I now wanted to keep practicing. The possibility of, maybe, one day being able to master it translated into hours of coding tutorials online until I realized that if I truly wanted to cause a positive, tangible, and sustainable impact in the world, I needed a more formal education to learn how to code.

Two months after, I quit my job, moved to Berlin, and enrolled in Le Wagon coding bootcamp where I lived through the 9 most intensive weeks of my life.

Now, coming from a Liberal Arts background, the first few weeks were pure torture. Changing my analytical mindset to a logical one was one of the biggest obstacles I’ve had to overcome. But the curriculum and pedagogical platform are so well designed that by the point I managed to cross that threshold, everything just clicked. Without realizing it, my team and I were building an entire platform from scratch where bootcamp alumni could enhance their portfolio by aiding NGO’s advance their digital brand. I later pitched this in front of 150+ people on our last day of the bootcamp.

By the point graduation came around, I had overcome my coding jitters to the point where Le Wagon offered me a position as a Teaching Assistant (TA) for their following batch. I then spent a month in Berlin TA’ing for Introduction to Ruby, which then led me to Tel Aviv TA’ing for Ruby on Rails modules, and now the entire bootcamp in Bali, Indonesia, where I am currently living for the next two months.

While I’m not working for Le Wagon, I have become a freelance full-stack web developer doing projects for companies, as well as collaborating in a national policy consultation platform for the Nigerian Government, the first of its kind in the African continent.

Needless to say, my life has taken a turn. The more I think about it though, the more I realize that the “turn” started not when I began programming, but when I started looking for ways to fix antiquated systems that were no longer fit for the reality of today.

Truth is, these traditional, narrow-minded structures are everywhere- in every industry, at all levels, in every country of the world- spreading like an unstoppable virus until we rethink, and more importantly, dare to create, a model that works that much better than the old one.

In fact, I am writing this today because while I was in Panama, I was surprised by the amount of friends who were unhappy with their 8 to 5. Whether it’s because they needed the money or just couldn’t find anything better, the complaint always ended up the same way: “the pay is not good enough for this shitty job.”

What the older generation isn’t realizing though, is that the youth is the motor of any economy. If we are not feeling empowered and motivated in our work, we will put less effort into our job, their company will not innovate, and this will inevitably hurt their profits (which, by the way, has a direct impact on our entire society). We have been taught by the older generations that the first few years of our careers should be torture; we should hustle and suffer until we get to where we want to be. And I’m sorry, but I simply refuse to believe that.

We should hustle for what we want, yes. But there’s no reason why we have to be miserable while doing it.

Today we can study anything we want online and for way cheaper than what our parents had to pay for the same or sometimes even better education (a lot of Harvard courses are online for free, for example). We’re also able to connect with far more people and way faster than they even imagined growing up, empowering us with a wider network than any other generation in history. We’re lucky AF to be born in this day and era, but we gotta take advantage of it. In order to do that however, we must master the internet to the fullest, something that can only be done by understanding how it is made in the first place.

Layering code on top of people’s various backgrounds is how my generation will transform the world in a more equitable, sustainable, transparent, and effective way than those before us. I truly believe that if we allow it (and more importantly, construct it), software can be the cure for corruption, inefficient bureaucracy (in corporations as well as government), and the lack of direct citizen representation that allows our politicians to do whatever they please on a daily basis.

Software is a tangible tool, created from nothing more than our brains, to solve a specific problem. Questioning and rethinking current processes with automation and digitization in mind is a task for all of us, no matter which field you’re involved in. The hard part is that we need to think for a world that doesn’t yet exist so we can create lasting products that will live through the world of tomorrow.

“You never change things by fighting the existing reality.
To change something, build a new model that makes the existing model obsolete.”

Now that we have the tools to create ground-breaking solutions, all we have to do is think what we want. And if you ask me, that will be the defining challenge of the 21st century.

BTW- If you’re interested in that e-Democracy research spree I was telling you about, here are my favorite findings 🙂 [would *specially* recommend watching Santiago Siri & Pia Mancini’s TED talks 👌🏼🚀 ] Enjoy!